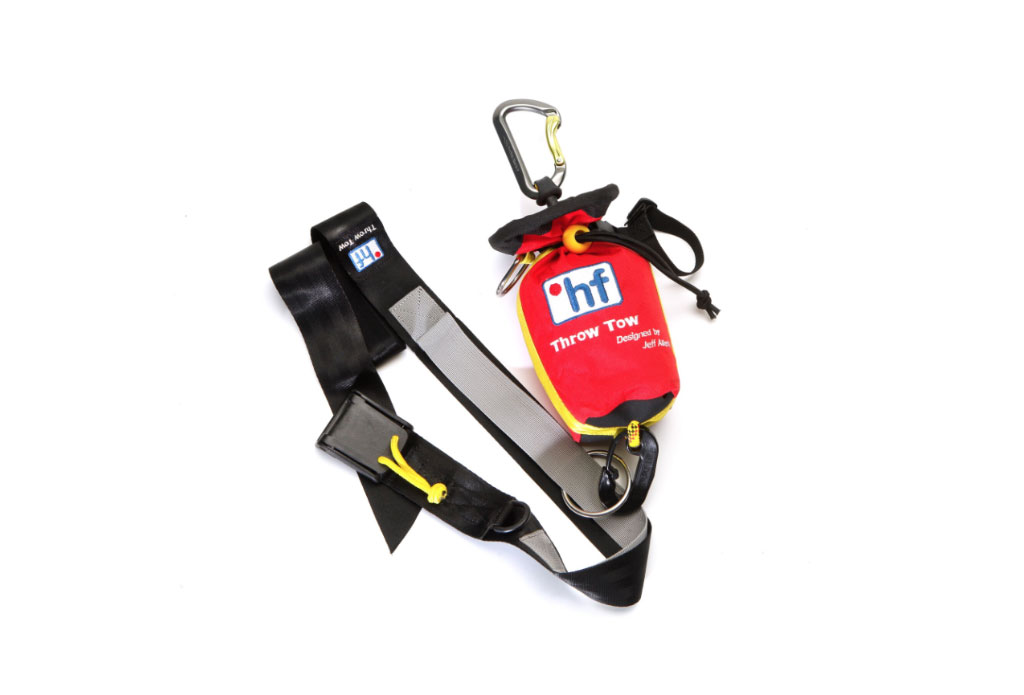 The Throw Tow is more than just a towline, it’s the Swiss Army knife of towlines. It’s a multi functional rescue tool for sea kayakers. Designed for HF by the sea kayaking safety specialist Jeff Allen. It combines the functions of a waist mounted tow line with the advantages of a throw bag and is also designed to be used as a sea drogue.

The tough Cordura bag is cone shaped with a mouth that stays open for easy repacking. This is closed around the end of the rope with an elastic draw string. The clip that is attached to this end of the rope is half a climbing clip draw. This makes for nice easy handling of the clip. With one hand you can pull the clip out and clip on. As you paddle away the rope feeds out the bag. The bag can be attached to the shoulder of your buoyancy aid but needs to be released with a quick release clip before you can start towing.

At the bottom of the bag is a plastic sea dog clip that connects it to a stainless steel ring on a 40mm waist belt with the usual plastic cam buckle release & toggle. This clip allows it to be released and used as a throw line. This can be handy for rescuing people from places that you don’t want to paddle into. It can also be used as a very mini sea anchor which can have its uses, although they are rare.

In fact many of the Throw Tows alternative uses are quite rare and when deciding wether to use one we suggest it should be mainly on it’s merits as a towline that you decide. While it is a great tow line it is far from simple and not ideal as a first towline. It is a feature rich complex system that requires practice to master. Its bulk also makes it more suitable for taller paddlers.

Approaching two decades of working in the sea kayaking industry, Phil can be found on a daily basis coaching and paddling on the coastline of Anglesey. That’s when he’s not travelling the world expeditioning, coaching and testing kit.