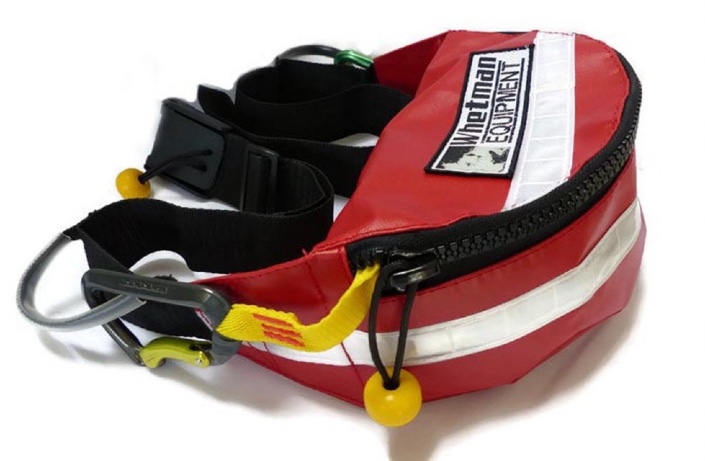 The Whetman Equipment Sea Guide Towline is a waist mounted towline designed for guides, leaders and coaches. As such it can be bought in a variety of configurations to suit the individuals needs. It features two different towing options. The main towline is made of a 14m length of webbing or rope. We found the webbing to be lighter, especially when wet, but we preferred the rope as it was easier to handle and repack at sea and caused less drag. This also features a built in shock absorber.

The Kraken is a stainless steel carabiner that has a clean snag free nose. It was developed by Whetman Equipment specifically for sea kayaking. It has some nice features including a bent back that matches the curve of the sides of a sea kayak which means it can be single handedly slid under the deck lines and rotated to clip the line.

The second towline is 40mm of webbing that comes out of the bottom of the bag. It is designed for close proximity or contact tows. The carabiners for each line can be clipped to large plastic loops on either side of the 50mm waist belt. These are similar to gear loops on climbing harness and are a great feature. The belt is fastened with the usual plastic cam buckle release & toggle. There is a slider to allow adjustment of the buckle position to be set central around your waist.

The bag is made of a tough waterproof material which means it doesn’t get heavier when wet. We did find the material started to show cosmetic signs of wear after a few years of hard use although it will continue to function for many years. The bag closes with a plastic zip. The zip teeth are robust & chunky to survive sand and grit from the sea.

Inside the bag there are some additional floats to make the bag float if dropped in the sea. We found out the hard way that these are necessary. In our usual drive to simplify our towing system we removed them and there is now a towline on the bottom of the sea.

Approaching two decades of working in the sea kayaking industry, Phil can be found on a daily basis coaching and paddling on the coastline of Anglesey. That’s when he’s not travelling the world expeditioning, coaching and testing kit.